Robots at your command- Robot programming!

We looked at some popular visual programming languages for children in an earlier blog – Know your programming toolkit!

Lets find out a little about programming robots in this blog.

By definition a machine is a tool containing one or more parts that uses energy (commonly electrical power) to perform an action. But today, machines are rarely just powered mechanical tools. Computers are finding a place at the heart of machines – instead of manual controls, machines are now controlled using computers.

Robots are the ideal example of a machine that can perform various operations because it is controlled by a computer. But simple robots (like those controlled with a remote) are pre-programmed – What happens when I press the forward button (move forward perhaps) is already decided by the manufacturer.

Programmable robots for children give this control –of what to make the robot do– in the hands of the student.

Robot programming languages help program robots, instead of characters/buttons on the computer/mobile screen.

Lets have a look at some programmable robots and languages- 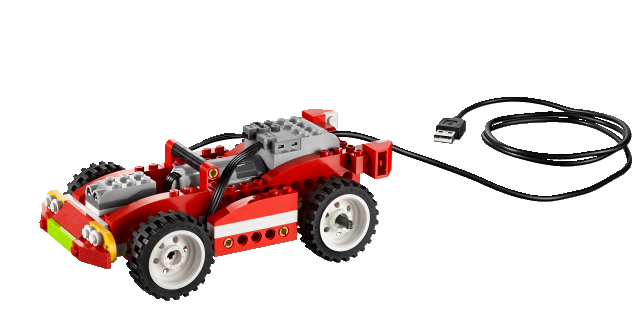 Lego Education combines traditional Lego model building with mechanical and sensor components. Models thus created can be programmed using technologies like Scratch, to teach children about how real world interaction between machines and computer programs takes place. An example is a model of a crane that can be controlled via a computer. Lego WeDo also has their own programming tool. It is a paid tool which has a block-based look and feel. The programming blocks have to be chained to create a program.  Lego WeDo costs USD 150 onwards, with added amounts for the resource set to build complex models like the car shown above, and for the Lego WeDo software. (These costs are for purchases in USA) 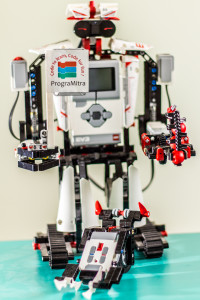 Lego Education series for older children involves making more complex models, such as colour sorters, robotic arms, etc. that can be programmed using Lego’s programming tool. This teaches children more about motors, sensors, and how to combine them to achieve realistic robotic applications. At the heart of the Mindstorms series is a controller called “The Brick”. It can be connected to the computer using USB and the program to control the robot can be transferred to the brick. Once transferred, the robot does not need to be connected to the computer, which can enable creation of a wide range of models that can move around freely. The programming tool may seem overwhelming at first site, but is very elaborate and provides fine-level control for each of the motors, sensors and brick buttons. Lego Mindstorms EV3 are priced USD 350 onwards, with additional costs for the resource set and the licensed software (prices if purchased in the USA) 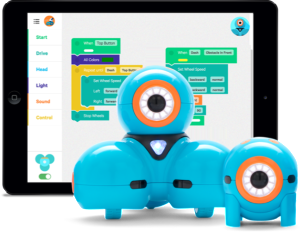 These immensely cute looking robots from Wonder Workshop have an instant appeal with children 5 yrs and up. Dash can move around whereas Dot is a stationary robot. Each of them has a variety of sensors. They can be controlled by programming them through an app that can run on iPads/android tablets. The app is based on Google’s Blockly interface –  a visual programming language that allows to drag and drop commands. The robots also have various interesting attachments – from a Xylophone enabling children to compose music using the App and Dash will play it on a Xylophone, to a Lego connector – that helps expand Dash and Dot with endless possibilities. Dash and Dot are priced at USD 230 onwards, with additional costs for the music pack, the lego connectors and other accessories. These prices exclude shipping costs to India.

Each of the robots listed above are great tools to teach children about applications of computer programming. But there are certain limiting factors-

1. Cost – All these tools are above INR 10,000 making them fairly expensive tools to own.

Keeping this is mind, we developed our own programmable robot at PrograMitra- Compushak! 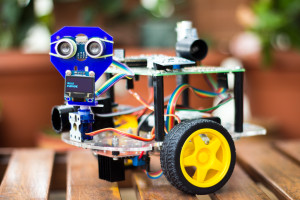 The kit is assembled by children to build the robot- complete with a variety of sensors controls. Our android application is then used to program the Compushak to do various activities. Our in-house development enables us to provide each child with one kit to work with during the course, without any sharing. Also, our android application for Compushak! is based on  Google’s Blockly platform. So, the app has the same drag-and-drop interface as the other programming tools children learn, thus making it very intuitive to control the Compushak!

In-house development enables us to limit the manufacturing cost to INR 5000/- . This way, each student at PrograMitra works with their own kit of Compushak! Also, to enable students to continue trying things out at home, students from the Senior Coders Course take away a Compushak! home at no cost, at the end of the course.

These tools are not just great toys, but they build a strong foundation for the understanding of applications of computer programming in real-world scenarios. So come, lets command some robots!

About the Author: admin